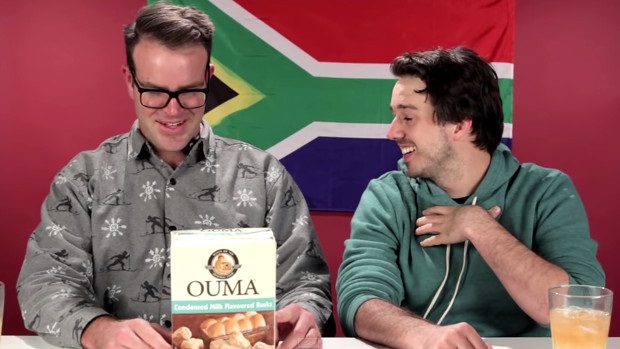 South Africa is a rainbow nation indeed, and our indigenous cuisine is no exception. Buzzfeed recently compiled a video of three pairs of Americans, trying six different South African snacks and it’s absolutely hilarious.  This recent video has gone viral over the past few days. The Buzzfeed video which was published on March 7, already has over 700 000 views and 900 comments.
Buzzfeed is the social news and entertainment platform that provides the most shareable breaking news, original reporting, entertainment, and videos across the social web to its global audience of more than 200 million people.
BuzzFeed created the video that shows Americans trying out South African snacks like Ouma condensed milk rusks, biltong, fish paste and koeksisters.

First things first, there is an art to eating South African snacks. And we think that they should have done a bit more research on how to eat them. You can’t just eat dry rusks right??? You have to dunk them first or you could be heading straight to the dentist!! A lot of the comments on the video agreed with these sentiments.

“This is Wonderful” – Koeksisters

We love our unique South African food, but what do a couple of Americans think about it? In the video there are mixed reactions, from comments ranging from “Dog food – straight up dog food” to “This is f***ing wonderful!”.
Not all the participants in the video are fans of our food, and we would have certainly left out the Peck’s Anchovette, although the responses were hilarious! Here is what we would have done:
– Proper Koeksisters drenched in syrup
– Substituted the Pecks with a mini-bunny chow
– Dunked the Rusk First
– Moist, Delicious Spicy Biltong, not the dry beef jerky that they are used to

Either way, its great exposure for our country and we would love for this video to get people curious enough to visit us and experience the real thing!!
Source: Buzzfeed