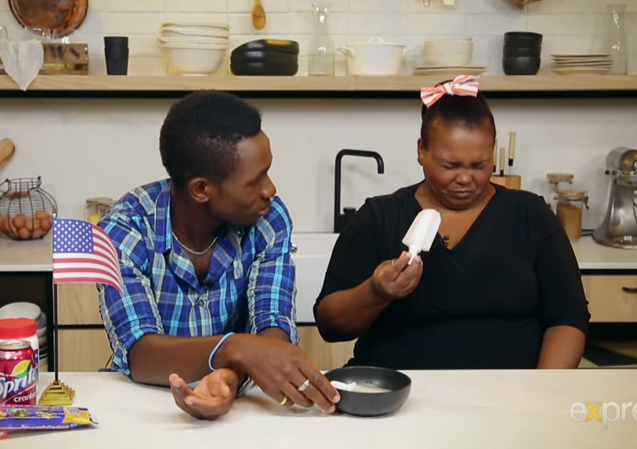 You have got watch the brilliant video The Expresso Show has produced in response to the Buzzfeed video, “Americans try South African snacks.” The video already has al most 50 000 views on Youtube.
We all watched in horror as the Americans tried South African snacks (and making the cardinal sin of forgetting to dunk their Ouma Rusks in coffee!). Now South Africa has responded with a video of South Africans (including children) trying American snacks.

The original BuzzFeed video has been viewed over 1.5-million times since it was published on 7 March 2015! In it, Americans try SA treats like Biltong, Koeksisters and Rock Shandy with reactions that range from “every single South African food is amazing” to “I feel like everything we ate was something you’d eat when you’re exceptionally drunk”!
The Expresso Show asked South Africans what they think of unfamiliar American snacks and the response is hilarious. What is interesting in this video is that they have included kids, and they really do say the darndest things.
(Who eats icing sugar on bread?!)

Here is the original “Americans Try South African Snacks” video that you can watch below:

South Africa’s Expresso Show has responded with a video clip of South Africans sampling several American snacks, including Pop Tarts (“I will totally eat this for breakfast” says one child!), Fluff (“looks like I’m about to eat Tippex”), Root Beer (“it smells like medicine”) and Pickle Pops (“it’s like salt water”).

Their conclusion? “Thank you America, we’re done!”
Have you tried any of the snacks in the video? We would love to know what you think of them.