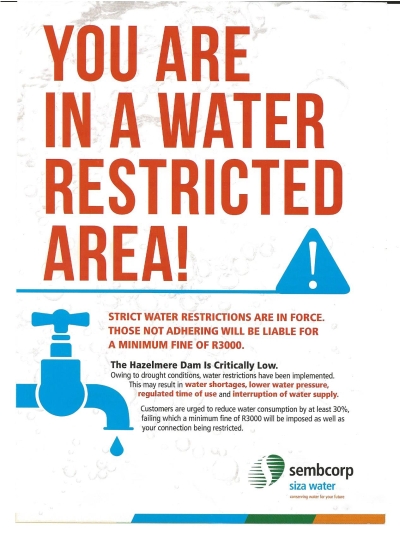 KwaZulu-Natal has been hit with a serious water crisis with minimum fines of R3000 for non-compliance being charged.

The crisis facing KZN was addressed by the iLembe municipality who held a press conference with its suppliers, Sembcorp Siza Water and Umgeni Water, in Stanger on Monday.
Stage 3 restrictions were implemented last week by Siza Water to reduce commercial and residential consumption by 30%. Since then it has fined 30 consumers for ignoring the restrictions.
“The minimum fine is R3 000 per incident, but when we are dealing with big customers (like the body corporates of flats), we look at how much they have exceeded their expected consumption and issue a fine accordingly after establishing that it was deliberate,” said Heather Joffe from Siza Water.

* Use of hosepipes totally banned.
* No washing of buildings or structures other than for immediate fire control or protection.
* No use of potable water for dust control.
* Known water leaks to be repaired within 24 hours. Dripping taps and toilets to be urgently repaired by consumers.
* Golf courses no longer allowed to use potable water to irrigate.
* Irrigation systems using the potable water system are to be turned off.
* Washing of vehicles, bicycles, motorbikes, trucks, boats, trailers and small planes is allowed only with buckets.
* Refuse trucks and vehicles carrying perishables and food are exempt from these restrictions.
* Fountains and water features to be disconnected from potable water supply.
* Pools may be topped up once a month and no new swimming pools may be built. Jacuzzis are banned.
* Pressure management may be introduced to curb consumption and hence lower water pressure may be experienced.
* Water supply may be interrupted to reduce consumption during the day. Businesses are urged to make appropriate arrangements for their sustainability during those times.

The worst-hit areas were in the Ugu District Municipality (Port Shepstone) and iLembe District Municipality (KwaDukuza-Stanger) which includes the luxury Zimbali residential and resort development.
Hopefully these restrictions will help alleviate the water crisis and avert having to implement stage 4 restrictions. Stage 4 restrictions are when dams are less than 30% full. Consumers then have to fetch water from tanks placed at strategic positions.

The 2 week weather forecast has predicted some rain in the affected areas and hopefully this will help in filling up the drying dams.The level of Hazelmere Dam was 43% and Ugu’s Nungwane and EJ Smith dams are at 35%.
“If we don’t save water now, then we will have dry taps in 150 days unless we get really good rain,” he said.
Hazelmere supplies the Ndwedwe Municipality, south of KwaDukuza, including Umhlali and Ballito, and north of eThekwini, including Verulam, Tongaat and Westbrook.
Residents are urged to please assist in helping with adhering to the restrictions.