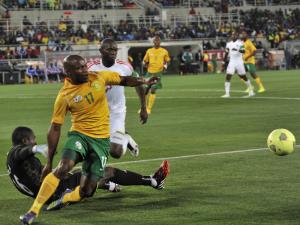 Green And Gold Were The Colours Of The Day As Our National Teams Take The Win! Well Done To Our Boys.

South Africa is celebrating wins both at home and abroad as our national teams excelled to give us a win on the soccer and rugby fields. It has been a great day for sport in South Africa as Bafana Bafana and the Springboks won their international matches today.

The AFCON qualifier, which took place at the Moses Mabhida Stadium today, was charged with emotion as the team played to honor the late captain Senzo Meyiwa. The match, which was moved to Durban in his honor gave Bafana Bafana and Durban a chance to make Maeyiwa proud. And proud they did as the national team clinched a 2-1 victory over Sudan.

The win has secured a spot for Bafana Bafana at the 2015 AFCON to be played in Morocco. The national team who were wearing black armbands to remember Meyiwa dominated through the match. The two goals were scored by Serero and Rantie. It was a nervy finish for Bafana Bafana as a goal in the 76th minute for Sudan kept the country on edge. A goal for Sudan in the 89th minute was ruled as offside, saving South Africa from a draw. Four minutes of extra time added on were a nervous 4 minutes as Sudan camped around the South African box. The final whistle declared the emotional and elated win.

The fifth consecutive win for our national rugby team was declared as the Springboks won against England in Twickenham a few minutes ago. The first half saw South Africa take a comfortable lead, as they left the field with South Africa at 13 and England at 6. This was quite an accomplishment on it’s own as England had 63% possession of the ball.

The second half saw South Africa in a few tense moments as England closed the gap on the score line. The 43rd minute saw Victor Matfield picking up a yellow card and sent off to the sin bin. With one man short, England quickly closed the gap, and producing a 20-20 score line in the 47th minute. Dylan Hartley picked up a yellow card for England for stamping.
Durban boy Patrick Lambie, the baby faced assassin helped put the score up, with Schalk Burger being substituted in the 77th minute declared man of the match. The win for the Springboks has certainly affected the mood for the Rugby World Cup 2015 which will be hosted in England and the final being played in Twickenham Stadium.

Well Done Boys! We Are So Proud!!!