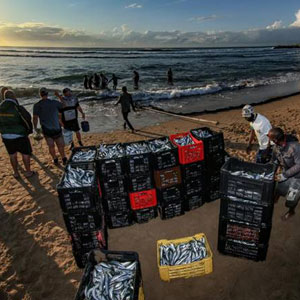 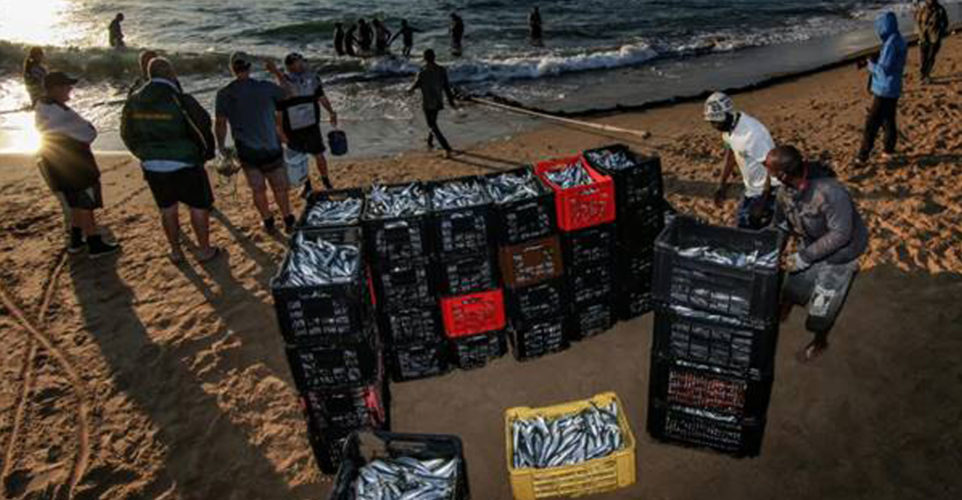 On Tuesday, 16 June, the KwaZulu-Natal (KZN) South Coast had front row seats to one of the planet’s greatest migrations as sardine activity took over the shoreline. Seine netters were able to catch crateloads of the little silver fish who were joined by a host of predatory marine life including gannets overhead with dolphins and sharks adding to the excitement.

“It was another amazing day of Sardine Run activity and the KZN South Coast has just been buzzing with sardine fever,” said CEO of Ugu South Coast Tourism (USCT), Phelisa Mangcu. “Big shoals of sardines were seen along the south coast, with netting taking place at Scottburgh and Pennington beaches. Beach visitors have enjoyed the chance to witness the incredible ocean action that is so unique to our shores.”

Mangcu said that, although it’s not ‘business as usual’ for tourism on the KZN South Coast, the Sardine Run also brings with it lots of economic benefits for the local communities.

“We’re so grateful to those people who have been coming through to support our commercial anglers by buying crates of sardines. There’s also been a lot of support for other local businesses, such as restaurants and cafes, and this is really welcome during these challenging economic times.”

Alongside the sardine action, fishing is excellent at this time of year and USCT has welcomed the return of both recreational and subsistence fishermen, all of whom have enjoyed great success while benefitting from vital food security.

The Sardine Run is an annual winter attraction for the KZN South Coast as the sardine shoals move northwards along the coastline in the cooler waters. The recent cooler weather has seen a rise in shoal activity, bringing with it sightings of sharks and whales, with sea birds and dolphins regular visitors to these silver shoals.

USCT is keeping everyone connected to the Sardine Run digitally during lockdown by uploading videos, images and up-to-date information. Check out the ‘South Coast Tourism’ Facebook page and @infosouthcoast on Twitter for breath-taking images taken by Donald Strydom Photography from the shore near the seine netters; aerial footage of shark activity by drone pilot @saltywaveslider Brad Mommsen; and underwater footage by Noel McDonogh. For more information about the KZN South Coast and USCT, visit www.visitkznsouthcoast.co.za or download the free ‘Explore KZN South Coast’ app to find a local supplier.

CAPTION: Shoals of sardines were sighted off the KZN South Coast today with netting taking place at Pennington and Scottburgh. Dolphins, sharks and gannets were seen pursuing the bait balls of little silver fish. Ugu South Coast Tourism (USCT) is excited about the return of sardine fever to the South Coast. The sardine run is usually a big tourism drawcard for the South Coast and they are pleased to welcome recreational anglers back to the shores. For official updates of the Sardine Run and to watch all the action, visit ‘South Coast Tourism’ on Facebook or @infosouthcoast on Twitter.